Australian neobanks Xinja, Judo Bank and 86 400 are attracting millions of dollars in savings from Australian banking customers following the launches of their higher interest rates.

ANZ, Westpac, NAB and Commonwealth Bank have lost a collective half a billion dollars in savings deposits in a matter of months, according to Nine News Australia, which calculates the rates offered by neobanks as high as 22 times those offered by the big four banks.

Xinja, the challenger which most recently launched its savings account ‘Stash’ last week, has already seen $30 million flow through its platform in deposits over the last eight days. The savings account offers a 2.25% interest rate on its users savings. 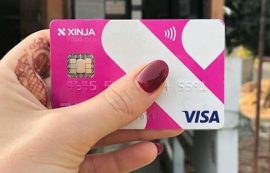 Xinja has had “a ripper response”, says CEO

CEO of Xinja Eric Wilson says the bank, which secured a full authorised deposit-taking institution (AID) licence last September, has had “a ripper response”. The challenger now plans to launch personal loans and home loans next, but stands firmly against credit cards, which it believes relies on “your customers [to] stuff up”.

But as the momentum mounts, one challenger seems to have struggled to handle the flow of demand on its platform. 86 400 published a tweet yesterday acknowledging that its app was down due to one of its technology partners having an outage. 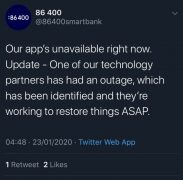 Two hours later, the bank said it was back up and running

Two hours later, the bank said it was back up and running. It revealed the downtime was due to AWS suffering cloud problems across Sydney.

We’re seeing similarly low interest rates offered by major UK banks on savings accounts. This prompted the Financial Conduct Authority (FCA) to rule earlier this month that UK banks must offer one interest rate for all easy access savings accounts in a bid to raise rates overall and save customers a collective £260 million. The regulator said competition “is not working well” for the some 40 million British customers using UK banks for their savings, who it says are currently left with “poor outcomes”.

It is yet to be seen whether challengers in the UK will create similar waves in such short spaces of time as their Aussie counterparts. Although those that do offer savings services have better interest rates, they are still trying to unpick the stickiness many banking users still feel with their incumbent bank.

Tokopedia lines up $1.5bn funding from Alibaba and Softbank