One of the highlights of the blockchain conference’s opening day was a show match between Blacklist International and the Teletigers Esports Club of the University of Santo Tomas. The two teams played the popular multiplayer online battle arena (MOBA) Mobile Legends (ML) in best-of-three matches. 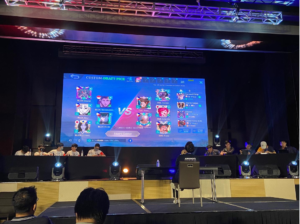 Players Owwwl, Eyon, Dominic., Steeeeveeee and Rindo represented Blacklist International, while Drew_, Emperorrr, Yecheil., Armenito and Rome played for the Teletigers Esports Club. The game was made more exciting with shoutcaster Luna commentating the match. Blacklist International dominated its opponents with a 2-0 win.

Before the show match, fans were also treated to a meet and greet with Blacklist International’s world champions. OhMyV33NUS, Dex Star, Wise, OHEB, Master the Basics and Hadji delighted the fans as they had their photos taken with fans. The popular gamers also obliged fans with an autograph session. 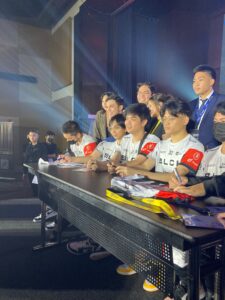 Tier One Entertainment CEO Tryke Gutierrez also participated in a panel about “Web2 games vs. Web3 games: How technology is changing gaming” together with Gala Gaming Founder Jason Brink. The fireside chat was moderated by Web3 and NFT marketer Caleb Roberts.

Web3, which is built on blockchain, is said to be the new age of the Internet, and what it will do with gaming is revolutionary. It will allow for micropayments, ownership and monetization of data, and a totally immersive gaming experience. However, many have focused on monetizing games instead of developing the gaming experience.

“In the advent of the bear market and what’s happening today, I think people are realizing that you don’t just question the technology around Web3 today. I think what you have to question is the motivation. Why are people building games? Because for a time, I think in 2021, people are just building games just to be able to monetize,” Gutierrez said.

“But I think at the core of every gamer is a person who wants to enjoy the experience… at the end of the day, gaming is for everyone, and the most important thing of gaming for me is the social aspect of interaction within the game,” Gutierrez added.

With the novelty of monetization and digital products like NFTs in the gaming space, many have lost focus on making Web3 games fun for gamers. Gutierrez admitted that this was the main reason he was skeptical about Web3 and blockchain at first, but he now recognizes their real value. And with Web3 game developers such as Brink, who prioritize both the user gaming experience and monetization, a bright future can be expected for Web3 gaming.

Should I Tip the Weed Delivery Guy?