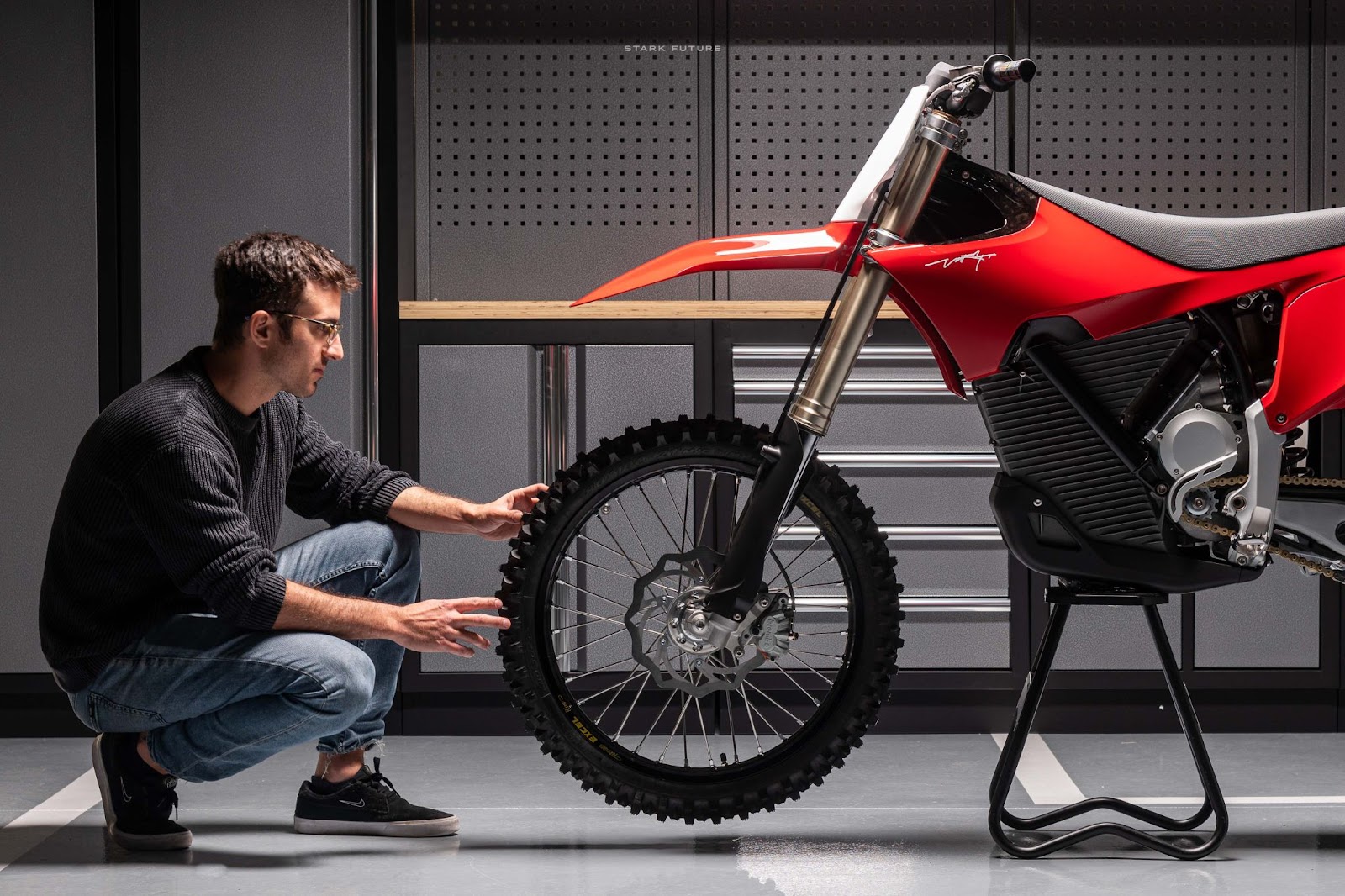 Every now and then, an innovative product comes along that completely spins pre-existing industries on their heads. For passenger vehicles, it was the Model-T; for communications, it was the cellphone; and for motorcycles, it could just be Stark Future’s all-electric Stark VARG motocross bike. With a stamp of approval from racing professionals like Sebastien Tortelli and Josh Hill and a record-breaking $56 million (€50 million) in first month sales, Stark Future’s repeated innovations offer a high-performance and sustainable disruptor to a market saturated with inefficient gas models, eclipsing conventional motorbikes’ capabilities across nearly every metric valued to modern consumers.

To begin, the Stark VARG’s battery life is essentially equivalent to a traditional 450cc motorcycle’s full tank of gas, offering an inherently greener ride than the latter’s pollution-prone build. This all-electric factor provides an important edge for consumers looking for sustainable solutions in an increasingly eco-friendly world, with the Stark VARG’s high-performance battery, the most energy dense system in the world, emitting zero of the list of pollutants traditional motocross bikes have become notorious for; according to statistics from the California Air Resources Board, motocross bikes produce 118 times the amount of smog‑forming pollutants per-mile than contemporary passenger vehicles.

The battery’s efficiency is apparently boosted by its patent-pending lightweight honeycomb magnesium casing whichconnects the bike’s cells directly to its casing creating a direct heat path to the air-cooled shell, helping stabilize the VARG battery’s lifespan against the same use-induced heat that regularly compromises other vehicles’ batteries. The IP69K waterproof pressure relief system is said to provide extra relief to the battery during full-throttle MXGP rides and lengthy track races, a patent-pending feature completely exclusive to the Stark VARG. The state-of-the-art Flying V system, creates a very compact powertrain structure that goes on to enhance the bikes’ handling agility and optimizes the vehicles’ overall equilibrium, providing a one-of-a-kind power-to-weight ratio otherwise unseen in the world of Off-road racing. 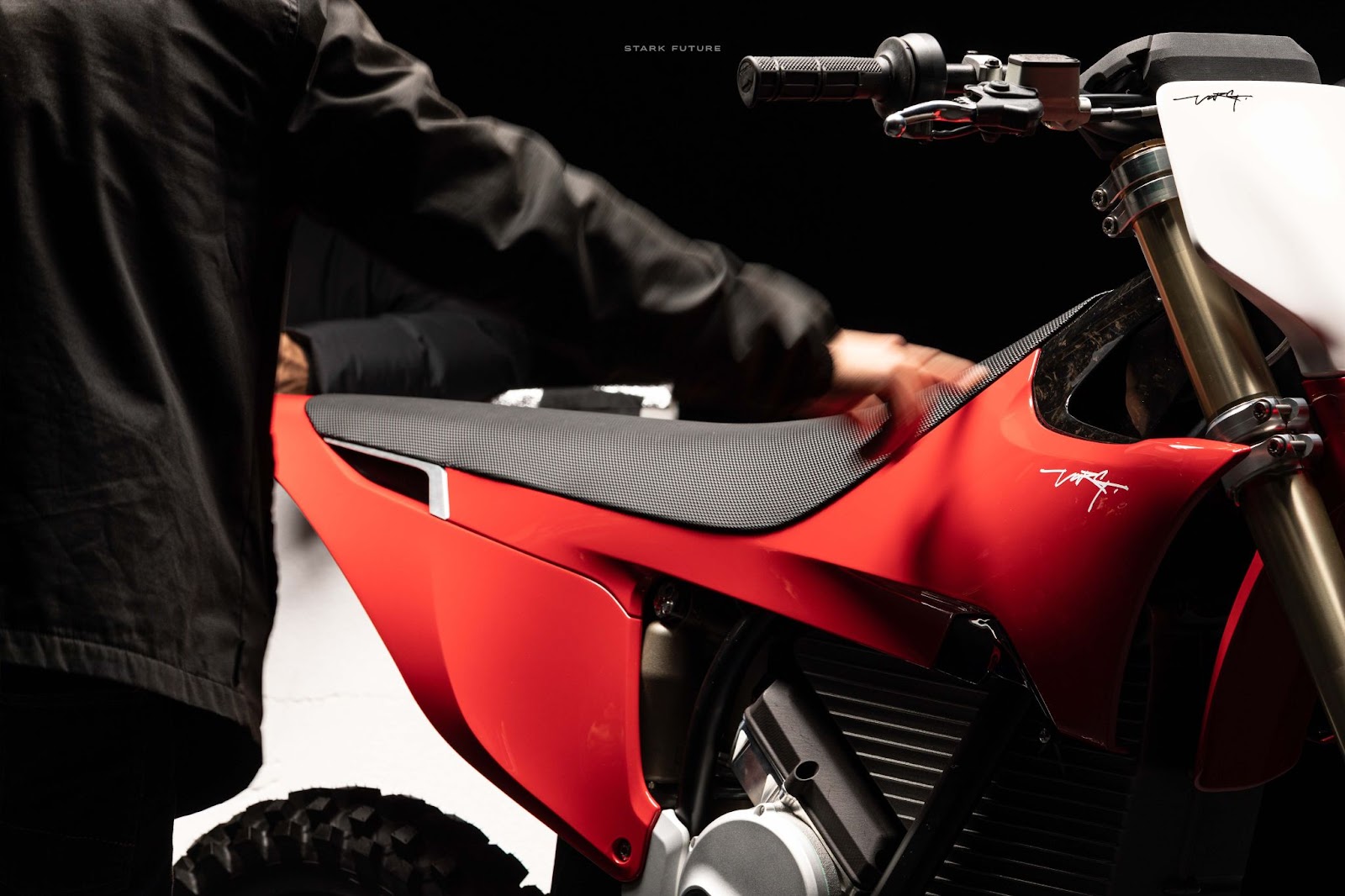 Pushing motorcycles beyond their traditional confines, Stark Future has outfitted its Stark VARG with the most effective power-to-weight motor of any mass-production bike – both gas and electric – in the history of the motorbike industry, sitting at a nominal 9kg in weight. Designed for a fully customizable ride, the VARG’s optimized motor allows the bikes ride modes to be easily modified for your ride, between the capacity of a ​​125 two-stroke to a 650 four-stroke, offering an unmatched versatility never before seen in the motorcycle market. Even between cylinder capacities, the Stark VARG motor’s peak performance of 80 horsepower with a 9hp makes the bike the fastest motocross bike on the market at some 30 percent higher performance than other conventional 450cc four-strokes and surpassing that of other electric options by huge numbers.

With the motor equally outfitted with patent-pending inventions, like the world’s smallest inverter for 50-100kW power ranges, and advanced processor power designed specifically to ensure algorithmic safety, Stark Future’s verbal commitment to innovation has been reflected through the eight patents pending for unique features of the VARG’s tech-forward electric design. 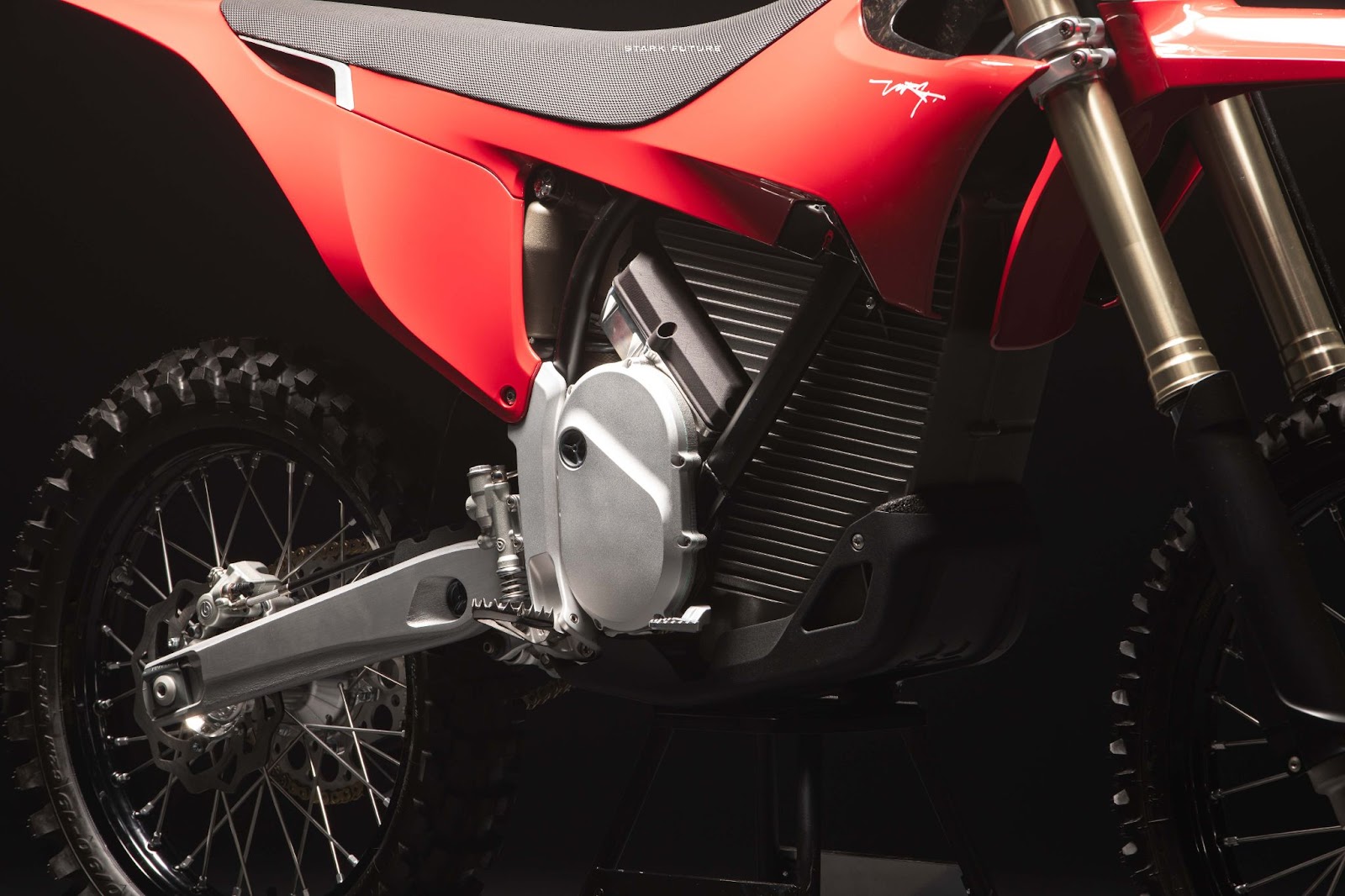 Stark Future has also made its Chromoly steel chassis a focal point of the VARG’s construction, taking the part’s role as proverbial ‘glue’ of the rest of the bike with utmost seriousness. The part was built after the meticulous analysis of other chassis available on the market, leading to improvements in weight optimization, handling and agility thanks to the VARG’s multi-directional flex chassis and its accompanying aluminum 7000 series Aero grade sub-frame that earned the title of the lightest frame in the world, allowing the bike’s overall build to stand at just 242lbs or 110kg.

Consistently finding state-of-the-art solutions to age-old problems of motorcycle design, Stark Future’s technology-forward approach to the Stark VARG design has positioned the bike as an indisputable class leader in the electric market and a viable contender against fuel-powered vehicles. Where major bike manufacturers have failed to design a game-changing electric bike, Stark Future has succeeded, marking a major advance forward for the future of the motorcycle industry, and bringing some much-needed sustainability along with. This is only the beginning…

6 Scenarios To Use Technical Translation Services