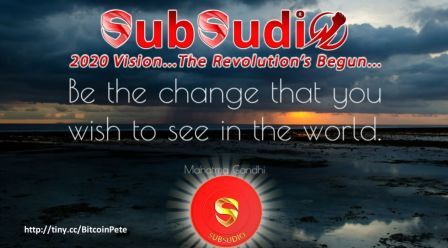 CryptoCurrency exchanges, regardless of them being centralised or decentralised, all have weaknesses beyond technology and are prone to human intervention. SubSudio, just like many other thousands of crypto start-ups, are all compelled to list on as many exchanges as possible, regardless of the size of their trading volumes or security weaknesses, in order for them to start expanding their communities.

CryptoCurrency exchange ‘AltsBit’ got “hacked” recently… this is yet another in a long line of “hacks” which could be genuine or, more likely to be, exit strategies as we have witnessed all too often lately. SubSudio start-up is due to launch on the 22nd of February 2020; after nearly 2 years in development and watching the blockchain sphere growth and acceptance into the global marketplace. SubSudio could have potentially failed before even starting due to the issues on two exchanges where its native ERC utility token SUBS is listed. Getting SUBS listed on several exchanges has been costly to them in respects of both time and finances to get it listed, with two exchanges now posing large risks to the launch.

Over 600,000 SUBS tokens are on the AltSBit exchange… @ $52.64 a token, as per the last trade executed there, that’s a $30+ million liability prior to the SubSudio grand launch on the 22nd. As if that wasn’t already a big enough of a challenge on its own, another 500,000 of SubSudio’s tokens are sat on the ‘DEEX Exchange’ and who haven’t honoured SubSudio’s withdrawal request since October 2019, with zero response from their operators. When they did finally respond they merely speculated that the issue was with something to do with the Ethereum network itself and that was why users couldn’t withdraw their tokens.

SubSudio could spend a year, or maybe two, building SubSudio up into the massive global business which they plan to do, and then literally have it completely wiped out overnight with 600k or 500k worth of SUBS dumped on the market, which seems to happen far too commonly nowadays with small crypto exchanges, who then simply put their projects into meltdown and take none of the actual responsibility themselves. This also has the negative effect of spreading FUD amongst their community and instils mistrust with their users and token holders.

Fortunately for SubSudio, as a start-up, it has been self-financed and thus avoided doing an ICO, regardless of many approaches with offers of priority listings on exchanges and other ICO offers. If SubSudio would have initiated an ICO it would be realistically finished now before it even got started.

So, time really being of the essence, last week SubSudio took the executive decision to set up a brand-new smart contract for SUBS and the new contract address is: 0xD7D7e034b5a9037A88659F734Bc216e7DF56e6FD.

This very effectively renders ALL old SUBS that are sat on DEEX and AltsBit worthless so that they can continue with their grand launch on the 22nd February as planned without those two massive nooses hanging over their heads. The official partner exchange to trade SubSudio tokens is the CiviliXation exchange.

SubSudio is the brainchild of Peter Aldred, AKA ‘BitcoinPete’, and It has been his life-long mission to help people, both financially and health wise. He’s had 30+ years experience in internet sales and marketing; back in the 90’s he built a team of 1,000+ distributors all across Europe and travelled extensively, running motivational meetings and seminars and, in 1999, he had a 7-page feature covering him and his business in Network Marketing News & Training magazine. In August 2000, he set up his own Network Marketing Company called ETHOS, offering a unique and innovative range of Ethos Healthy Lifestyle Products and, over the next 10 years, built that up to 10,000+ distributors in 87 countries around the world. His products have been sold very successfully over the last 20 years. He originally got involved in cryptocurrency way back in 2012 and started buying up bitcoins when they were just $9.00 a coin!

SubSudio redefines the internet with a brand-new, privacy-centric, alternative suite of web applications and its own new IntraSubsNet ecosystem for user privacy, freedom of speech, net-neutrality and non-censorship.

Net-neutrality is the principle that Internet service providers (ISPs) must treat all Internet communications equally, and not discriminate, or charge differently, based on; user, content, website, platform, application, type of equipment, source address, destination address, or method of communication.

The basic ethos of SubSudio is to build a decentralised internet for user privacy, freedom of speech and non-censorship… and to bring together all the existing projects, which are currently working separately, together all under one new brand; thus enabling them to be used in conjunction with one another… including educating people on how best to use and benefit from them and therefore regain their privacy in the online world back once again.

Their core focus is on privacy and net-neutrality and the first flagship product that they are launching with is a brand new, highly advanced, search engine which offers unadulterated, organic search listings once again; exactly like they used to be ‘back in the day’, before the major corporations monopolised them into totally privacy-un-centric ‘cash-cows’ via extracting their extortionate advertising revenues and the selling of, and remarketing to, everybody’s, what should be private and confidential, personal information and data.

As opposed to going down the now alienated IPO or ICO route, SubSudio came up with this very unique and innovative way to self-fund the final development phase of their initial offering – subsudio.com. This is just the very tip of the iceberg of their massive overall endeavour to build out a completely new internet system and to be the main central hub and gateway liking the old, now very outdated, www internet with, not just one, but two, totally new and highly advanced, privacy-centric internet systems and protocols. You can read the full details of their future plans in their ‘Lightpaper and review their roadmap on their corporate website at: subsudio.io.

Imagine getting into Google while ‘Dogpile.com’ and ‘Altavista.com’ were still the leading search engines and most people were using the Netscape browser. Or getting into Microsoft while ‘good ole Bill’ was still tapping away on his keyboard sat in his garage. Just like the hit Spielberg movie ‘Back to the Future’, if you are still kicking yourself for missing out on those incredible once-in-a-lifetime opportunities in the past, now is finally your chance for a reprieve. Exactly the same as if you missed the boat with Bitcoin, most people can still afford to buy whole SUBS coins – don’t miss out again and end up kicking yourself whilst having to settle for just buying decimals…

Peter has assembled a crack ‘Dream Team’ of like-minded individuals and experts, from all different fields and all walks of life, who have all been brought together by their mutual love for crypto – not just to make a quick buck; but for their understanding that crypto is the future and their desire to help educate and teach others about the major benefits of using cryptocurrencies over the worthless fiat currency and also the importance of net-neutrality and privacy which has been taken away from us gradually as the years have gone by. Now is the time to finally turn the tables once again and start again with an entirely new system – SubSudio IntraSubsNet.

So, despite these last-minute challenges, they are still on track to launch on the 22nd of this month and it well be very interesting to follow their very interesting endeavours and see where it takes them from here. It makes a very refreshing change to see a self-funded project like this, which is actually launching with working products, as opposed to all the previous ICO’s of yesteryear who collected millions of dollars from people and then failed very miserably to deliver anything tangible whatsoever. So, I take my hat off to them and wish them every success in the world. It’s high time someone took a stand like this and actually started doing something to ‘be the change they wish to see in this world’.

Peter also tells me that an alliance was forged between The SubSudio Corporation and OneTreePlanted (OTP); a 501(c)(3) non-profit organisation based in Vermont, USA. Now, a small percentage of all revenues generated by SubSudio are donated to OTP and, for every dollar donated, one real tree is planted in one of the three reforestation project areas that they have chosen to support.

They are currently focused in on reforesting these three areas: Vietnam, The Philippines and The Amazon Rainforest.

So, it makes an even more refreshing change to see a Cryptocurrency with environmental awareness like this and they tell me that customers’ purchases can even be used to help them offset their carbon footprint.

With Peter’s Philanthropic nature, he has even arranged a very special promotion whereby all of our readers can donate one tree, absolutely free and at no cost to themselves, by simply clicking his personalised promotion link here: onetreeplanted.refr.cc/peteraldred

The SubSudio Corporation is incorporated in the State of Delaware and is a Subsidiary of VanillaIce LLC.

VanillaIce LLC is registered and Incorporated in the State of New Mexico and governed by the Laws, Acts and Statutes of New Mexico.

An evolution in the world of trading