The metaverse has been a hot topic in the stock market for the past few years. Before we dive in, we should first know what a metaverse might be. In short, many people think of a metaverse as a virtual world with an immersive digital interactive experience. This is achieved through the use of virtual reality and augmented reality. Notably, many technology companies are already taking action to get a foothold in virtual worlds.

Various technologies under the metaverse concept, such as blockchain technology, AR, VR, games, telecommuting, 5G/6G, instant social, NFT, film and TV, are migrating to the metaverse. After the metaverse became popular, the additions are mainly in virtual control and even brain-computer interfaces. This is portrayed quite a lot in film and TV works, such as The Matrix, Ready Player One, etc. The metaverse has become a global technological hotspot. According to PwC forecast, the market size of metaverse is expected to increase from $5 million in 2020 to $1,500 billion in 2030 in the next decade, with a compound annual growth rate of 253%.

There are many ways to understand the concept of a metaverse. A metaverse is a 3D simulation, and an enhanced mapping of digital information into physical space. The organic combination of the metaverse and the physical world, also known as the CPS Cyberphysical System, or digital twin, can more accurately express the technological trend of the metaverse and the original human-centric focus of technology. Ultimately, all objects in physical space need to be digitally modeled and mapped to Cyberspace, making physical space a computable object in Cyberspace. But more importantly, the results of computation in Cyberspace also need to be mapped back to physical space, thus serving to strengthen the real-world capabilities of humans.

The metaverse builds new 3D immersive application scenarios and content on the basis of the Internet with the help of graphics, artificial intelligence and arithmetic power. The underlying layer of the metaverse is the media revolution. Only with new technical paradigms such as the new paradigm of AI based on graphics and AI based on 3D graphics can the metaverse succeed. From the technical perspective, the core element of the digital economy is data. Blockchain and other new generation information technology are tools for processing data, and the main task is to maximize the value of data and form a data-based service model, so as to promote the development of the digital economy.

Regardless of the technology, standards are the cornerstone of capability advancement. Blockchain technology is no exception. “Web 3.0” often appears together with the “metaverse”. In the future era of Web3.0, applications are decentralized on a large scale. With the standardization and promotion, blockchain acts as a bridge between virtual world data and real world data. The metaverse is reality virtualization and virtual reality. The biggest value presented by the metaverse is the interconnectivity between the physical world and the virtual world. The unique identification of distributed digital identity based on blockchain and the effective authentication of things can realize the one-to-one comparison between virtual world and real world information, enabling the development of the metaverse.

If video game technology is the underlying infrastructure and soul of the metaverse, then AI is the key entry point and core technology into the metaverse. In the metaverse, human beings and AI build various interactions together, which requires the establishment of a complex interaction relationship and dialogue between AI and AI. AI crawls structured documents from search engines and uses techniques such as BERT to concatenate the content and make it its own. AI sorted out the news and comment data of cooperative media, extracted high-quality content and turned it into AI dialogues, and used large-scale models such as GPT-3 to generate smooth texts and AI dialogues.

The new future of intelligent interaction

Human-computer dialogue interaction has been an important application scenario for artificial intelligence. Technologies such as VR/AR/MR and hologram technology, sensing technology are also key components. Both the evolution of data communication technology, the innovation of Internet technology, and the transition of visual presentation have been made possible by more powerful computing power, larger and more secure storage space, and more efficient networks. Interaction is one of the cores of the metaverse. The basis of strong interaction in the metaverse is the low-latency transmission and synchronization of data, and the data for which the metaverse requires low-latency interaction include control signaling, audio and video, and VR and AR dot-maps. 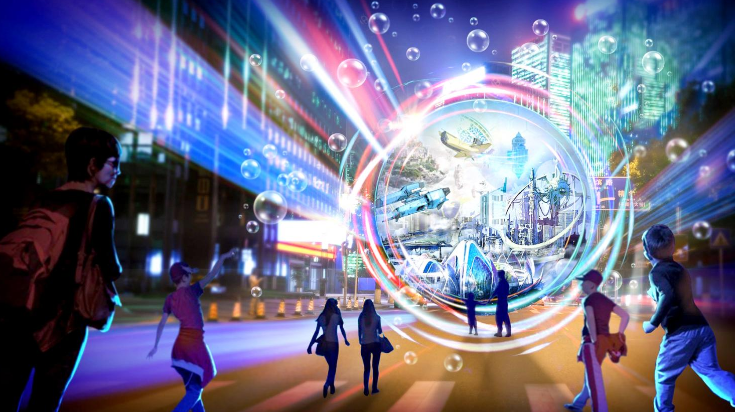 Meta Platform’s digital economy launched new tools last week to peddle virtual goods in the virtual reality game Horizon Worlds, and Meta says a “handful” of creators will be able to sell “fictional items and effects” in their respective worlds. Meta also said it will reward creators whose virtual worlds prove particularly popular with users with monthly bonuses. According to The Verge, the program will not charge any fees. In the virtual goods marketplace, Meta may charge between 25 and 70 percent. Both show that Meta has built the infrastructure to support the digital economy in the early days. However, it promises more monetization and incentive features are in development.

NBA has announced the launch of its own NFT initiative, called “NBAxNFT. According to the statement, the goal is to showcase “everything related to basketball and Web 3.0, including the NFT, the game and the metaverse. NBA x NFT is described as “the official Web3 home of the NBA,” and the project aims to combine all of that with the NFT, the game, the metaverse and the Web 3.0 concept. In terms of all-time sales of NFT collections, Dapper Labs’ NBA Top Shot NFT collection ranks ninth in all-time sales. To date, NBA Top Shot has generated $16,006,548 in total sales since NFT’s inception, which equates to $885.6 million. The recently launched Discord channel has more than 35,000 members at the time of writing, and according to the NBA, the 2022 postseason NFT will be released this weekend.

Global software giant Adobe released its Metaverse Action Guide and opened up its collaboration with leading brands such as The Coca-Cola Company, Epic Games, NASCAR and NVIDIA on a range of technology innovations and customer experiences. These include functional services that support the metaverse, such as 3D and other immersive content creation, virtual shopping experiences, and the portability of virtual identities and assets. Adobe will reportedly design exclusive virtual characters and assets for users of the metaverse and other immersive experiences on their own, and use these customized assets in virtual worlds.

WiMi Hologram Cloud (NASDAQ:WIMI), the world’s leading holographic AR company, has also accumulated many “metaverse” technology core capabilities. In the process of entering the era of 5G interconnection of everything, the human-computer interaction technology represented by AR/VR is the core of its metaverse simulation interaction and virtual reality connection.

WiMi Hologram Cloud (NASDAQ:WIMI) is committed to independent research and development and investment in the core field of 5G, and stands out in a crowd of complex environments and various competitors. It fully integrates 5G, AR, VR, AI and other technologies to build metaverse underlying technology forts. Based on the accumulation of AI algorithms and 3D cloud design, the company will explore and try to integrate the metaverse with reality through more AR applications.

Along with the rapid development of the metaverse, the evolution of new-generation information technologies such as blockchain, artificial intelligence, digital twin, human-computer interaction and the Internet of Things is not an accident, but a technical preparation for the evolution from Web 2.0 to Web 3.0. The development of previous technologies lacked the support of a complete ecology and required larger and more focused concepts and scenarios to pull the new generation of information technologies to further integrate, thus building a digital ecology-oriented infrastructure to support the complex application logic, business innovation and business models of the metaverse.