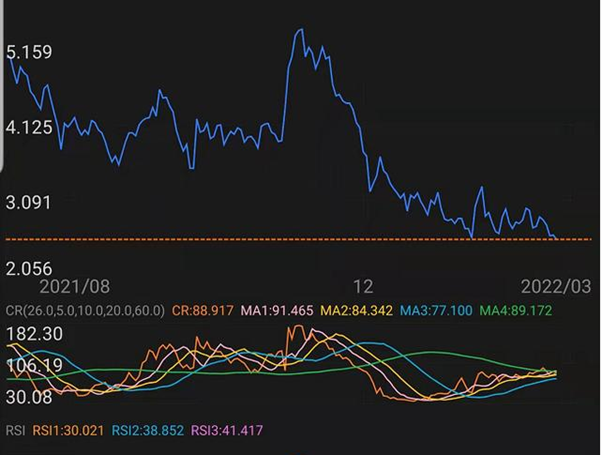 WIMI (Nasdaq: WIMI) is in controversy like most other Chinese stocks, with WIMI shares down more than 16%, even as it grows dramatically this year. Currently, WIMI values it far below other Metaverse stocks. In addition, the recent market geopolitical risks to Russia and Ukraine and the frequency of the Fed raising interest rates seem to be overstated, which is a major reason why WIMI stock is so low. WIMI’s growth is likely to exceed expectations, thanks to the growing metaverse AR market.

The chart shows that WIMI shares fell to an all-time low of $2.47 last month, so why did WIMI shares go all the way down? It is not to say that WIMI’s poor performance. Instead, WIMI’s earnings showed 202.2% year over year, WIMI’s shares came under selling pressure from continued panic about the Fed’s tightening and other temporary factors that were not directly related to WIMI’s results.

The digital transformation of the global economy accelerates, and semiconductors have become the core carrier of many new technologies and application scenarios. MWIMI shares are now oversold, and from a technical perspective, WIMI is expected to reverse from around $2.50. As shares have frequently hit support at around $2.50 in recent sessions, we could see a long-term bottoming pattern. Furthermore, the RSI hit 30 levels, consistent with another high overselling point in 2021. And the full stochastics leveled off and showed clear signs of stopping losses shortly, and we should soon start to see the stock return to more bullish technical momentum.

1. Why is the market atmosphere so low right now?

Most tech stocks recently have been crushed by Fed rate hikes and geopolitical risks, and WIMI is no exception. Further on, however, the recent big sell-off in tech stocks could only be a temporary phenomenon. First, is the problem with Russia and Ukraine. Although Russia and Ukraine are at war, the US stock market has solved most of the bad news so far. A quick rebound does not seem impossible, once there are signs of easing down in Russia / Ukraine. Lone Ranger boss Mark Cuban said that the overseas conflict will not force investors out of the market, because there is no better choice to get high returns.

In the situation between Russia and Ukraine, the outlook for a rate hike at the Fed has changed. Just two weeks ago, the highest growth rate in January, the Fed rate hike rose further, with pricing almost entirely reflecting a 50 basis point rate hike in March and even a special rate hike at the end of February after the announcement of the US CPI. However, this week, as the geopolitical turmoil deepened in Russia and Ukraine, and public statements from several Fed presidents, the market expected the Fed to raise a 25 basis point rate in March. Overall, market expectations for Fed rate hikes seem to be highly exaggerated.

2. There are huge business opportunities in the holographic AR field

According to IDC estimates, overall AR / VR shipments will reach 66 million units by 2022, and of which AR products will account for about 40% of the AR / VR market, with the maturity of AR technology and the unit price of AR products, the global AR market will grow with an annual compound growth rate of over 69% in the future. The global augmented reality industry market size will reach 287.2 billion yuan by 2024.

Holographic AR serves has huge growth potential as an emerging market, so how is WIMI doing? The data won’t lie. According to its earnings report, WIMI’s $37.5 million in holographic AR sales ended June 30, 2021, surged 202% year over year. Some analysts have predicted that while WIMI has many competitors, it has strong innovation capabilities in holographic AR, benefiting its expanding market share for some time to come.

Major countries around the world have introduced semiconductor incentives to boost the region’s market share in the global semiconductor industry, which is exceeding expectations. In the past 2 years, WIMI’s semiconductor division has become increasingly important. In the first half of 2021, the business has surpassed the holographic AR business with revenue of $42.35 million, a division that mainly provides smart chips and software solutions to businesses.

As WIMI continues to grow in this sector, it will have an increasingly positive impact on the growth technology company. That bodes well for the company’s future.

When the Internet traffic growth peaked and the industry growth slowed down, the metaverse seems to have become a synonym of the next development stage of the industry. In history, the metaverse has become one of the biggest investment opportunities for nearly ten years, now the metaverse is like what Musk has put forward that the new energy vehicles, in 2015 and 2016. Many people feel incredible with new energy vehicles at that time, but now new energy vehicles have been quickly popularized. Even the most whimsical unmanned driving, now seems, is not out of reach. Morgan Stanley said in a research report released on February 22 that China’s metaverse market could reach 52 trillion yuan, about $8 trillion in the future.

So, as far as WIMI share concerned, the company can now and future tell many compelling growth stories in the Metaverse, such as:

Given that these are just announcements in the past few months, and similar headlines are expected to continue in the future, investors are more willing to bet on stories, hopes, and dreams that “supergrowth investment” becoming the mainstream on Wall Street. And the recent sharp decline makes WIMI’s relatively cheap share price more attractive.

Given the still strong demand for semiconductors and the huge market size of the Metaverse, and the proposed growth drivers, WIMI’s profitability and stock price are likely to increase significantly with the company. Given WIMI’s strong growth outlook and substantial earnings potential, analysts expect WIMI’s shares to be reasonably valued at around $6.

It is due to the current uncertainty of Chinese stocks and short-term market sentiment that the WIMI valuation multiple is pushed down to incredibly low levels, and WIMI is very undervalued compared to the market sales ratio of the broader technology industry.

6. The risk of buying a WIMI

Investing in any growth business is a risky investment, but if all goes well, WIMI has huge return potential. While WIMI prospects are good, investors should also consider some of the potential risks of buying the stock. For example, although WIMI’s growth story is strong, all Chinese stocks face some political risks and are not over-described here. In addition, WIMI may slide some of its market shares to competitors in the next few years, so WIMI will face poor market growth expectations. In short, it is a high-risk/high return growth stock.

Clinical Application of Next Generation Sequencing